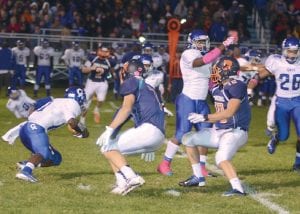 Carman-Ainsworth’s Jevonte Alexander swings outside on the carry against Flint Powers last Friday at Holy Reedemer.

BURTON — Carman-Ainsworth was going to need a well-executed game to beat Flint Powers Catholic in their football showdown last Friday.

The Cavaliers didn’t get it.

In a meeting of two state-ranked, undefeated teams, the No. 4 Div. 1 Cavs lost two fumbles, an interception and had a punt blocked in a 32-7 loss to the No. 1 Div. 5 Chargers at Holy Redeemer Field. The defeat dropped Carman-Ainsworth to 6-1 overall and 3-1 in the Saginaw Valley League- South, likely ending its chances for a conference championship. Powers is 7-0 and 4-0.

The Cavs came in averaging 43 points a game and allowing less than five, with three shutouts. But they surrendered five touchdowns and 378 yards to Powers, while managing just 137 yards of their own and no points on offense. Carman-Ainsworth’s only score came on a 21-yard fumble return by Alton Yarbrough with 4:38 left in the game.

By then, Powers had 32 points on the board. After Carman-Ainsworth fumbled on its opening possession, the Chargers cashed it in for a 50- yard touchdown pass and a 7-0 lead. A blocked punt on the Cavs’ next possession gave Powers the ball at the eight-yard line, and the Chargers scored two plays later on a three-yard run with 4:04 left in the first quarter.

Powers tacked on a one-yard touchdown run in the second quarter for a 19-0 halftime lead and made it 26-0 with a 36-yard touchdown pass midway through the third period. Another Carman-Ainsworth fumble in the fourth quarter led to Powers’ final score, on a six-yard run with 7:27 left in the game.

The Cavs, now ranked seventh in Div. 1, already have a playoff berth wrapped up and are playing for homefield advantage in the first round. They will visit Southwestern Academy at Atwood Stadium on Friday and host Davison on Oct. 19.