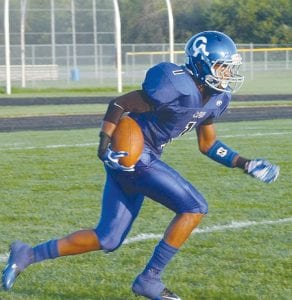 FLINT TWP. — The quarterback move looks like an early success. The running back position is the new question mark in Carman- Ainsworth football.

Shane Barron threw two touchdown passes and ran for 123 yards in his first game as the Cavaliers’ quarterback last Friday. But Carman lost junior running back Gerald Holmes to injury early in the game, as the Cavs dropped their season opener, 21-14, to Grand Blanc.

“It was a good game,” said Carman coach Nate Williams. “I thought my kids fought well. We made a couple of errors, and I left some points on the board field goal-wise that I should have gone after.

“But Shane looked really good and ran very well. We had some assignment glitches where we missed some opportunities. Gerald got hurt in the first quarter and that took a little bit out of our running game. But Lorenzo Redmond came in and carried the load for us.”

Holmes is day-to-day and should be able to play this week, Williams said. He had 21 yards on six carries before leaving. Redmond, a sophomore, stepped up with 40 yards on 11 attempts.

Barron, a senior who played receiver his first three years, hit 5-of- 16 passes for 75 yards, including touchdown tosses of 43 and seven yards to Brandon Lenoir. The speedy Barron got his 118 rushing yards on 23 carries, a 5.1-yard average.

Carman never led after fumbling the opening kickoff to give Grand Blanc an easy 7-0 lead just 44 seconds into the game.

The Cavs did tie it on their second possession, when Barron hit a wide-open Lenoir for the 43-yard score. Connor Storm’s extra point made it 7-7 with 2:46 left in the first quarter.

But Grand Blanc took the lead for good on its next possession, going up, 14-7, just eight seconds into the second quarter.

The Bobcats made it 21-7 at 5:52 of the third quarter after one of two interceptions off Barron.

Carman drove to the Grand Blanc 5 midway through the fourth quarter but came away with nothing when Barron was stopped on fourth down. The Cavs did score on their last possession, the 7-yard toss from Barron to Lenoir with 1:13 left. But they never got the ball back.

“They’re a top-of-the-line program that did very well last week,” said Williams. “ We been talking to the kids about matching their intensity. If we do that and match their execution, we’ll do very well.”