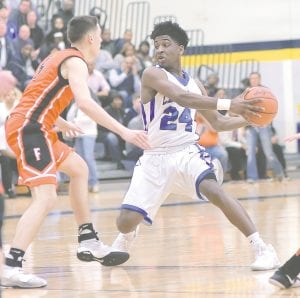 Carman-Ainsworth’s Chan Pearson keeps the ball away from a Flushing defender during Monday’s district game at Owosso.

OWOSSO — The Carman- Ainsworth boys’ basketball team dropped its opening round district game on Monday to Flushing, 39-36. The loss was only the second for the Cavaliers, abruptly ending their season. Carman- Ainsworth led 13-7 after the first quarter, but Flushing answered back with a 9-6 run in the second, making the score 19-16 in favor of the Cavaliers at the half. After the break, both teams traded baskets throughout the third quarter, leading to an 11-10 Carman-Ainsworth advantage in the quarter to enter the fourth ahead 30-26. Flushing would stage a comeback in the final quarter, clawing its way back from its deficit and taking over the final quarter with a 13-6 run to leave with the victory.

Carman-Ainsworth finishes its season with a 10-0 league record, going 19-2 overall. The district tournament continued with semifinal games on Wednesday after press deadlines between Flushing (19-2) and Swartz Creek (11-9) and Owosso (6-14) and St. Johns (16-4). The finals will be held tomorrow at 7 p.m. at Owosso.