Cavaliers finally back on the diamond 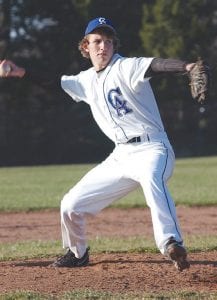 Carman-Ainsworth’s Nick Hill wound up for the delivery.

FLINT — After being out of action since April 21, the Carman-Ainsworth varsity baseball team was finally able to get back on the diamond on Sunday at Broome Park in the opening round of the Greater Flint Tournament, enjoying a hard-fought, 8-7, victory over Flint Metro League rival Lapeer West.

“The Cavaliers had left 10 runnners on base before a six-run sixth inning put the Cavaliers ahead, 8-6. In the top of the seventh, sophomore Jamaal Dixon got the save. Senior Nike Hill threw four innings of two-hit base ball (with six strikeouts),” said coach Tim Miller. “(Carman-Ainsworth’s) big sixth inning was catapulted by sophomore Justin Hubbard’s three-run triple that tied the game at, 6-6, then freshman Brennen Gleason had a two-RBI single to to put the Cavaliers ahead. Sophomore’s Grant Roe and Brett Dortch had two hits and junior Jake Weissend had three hits.”

Carman-Ainsworth then went on to face Lapeer East in the semifinals and fell, 17-0, as the Eagles scored six runs in the top of the fourth inning to enact the mercy rule. Posting the Cavaliers’ lone hit was Justin Hubbard. With East managing 11 hits total for the contest, it was Paul Woloszyk who led the charge with four runs, four walks and two steals, Gary Bulzan and Travis Early managed three hits each and laying down two hits apiece were Eric Strickler and Chaz Hill.

That set the scene for the Cavaliers’ season-opening Big Nine twin bill against Davison (9-4, 5-1) on Monday that didn’t go so well, including a 12-3 defeat in game one. The first contest was actually tied at 3-3 in the fifth inning, when the Cardinals opened the floodgates with eight runs on four hits, including two-RBI doubles by Joe Shannon and Cody Wangler that helped Davison take an 11-3 advantage. Shannon also singled to clock two of the Cardinals six hits for the matchup. On the mound, Davison got a seveninning pitching performance from Lauren Graham, allowing three hits and six walks with 14 strikeouts to earn the decision. For the Cavaliers, Grant Roe had a single and two RBI.

In the nightcap Carman-Ainsworth was downed, 7-0, as Cardinals sophomore hurler Maverick Prine pitched a no-hitter, striking out 10 and walking two. Also proving key for the Cardinals were Mike Dolloff with two hits and two RBI, including a solo homerun, and sporting a pair of singles for the game was Tyler Ramoie.

The Cavaliers, 2-5 overall, 0-2 Big Nine, are at Brandon today, on Monday the squad welcomes Flushing for a league doubleheader and on May 12 Carman-Ainsworth is at Richmond for a set of non-conference games.