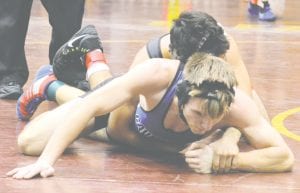 Carman-Ainsworth’s Nathan Peterson tries to avoid pin at the County Meet on Dec. 16.

WILLIAMSTON – The Carman- Ainsworth wrestling team finished 14th overall with 53 points at the 56th Annual Jim Mooney Williamston Classic on Saturday. Eaton Rapids won the event with 191, Sparta was the runner-up with 182 and New Boston Huron finished third with 170.

Nathan Delong at 152 and Jacob Yost at 140 were the only Cavs to place individually, finishing fourth and fifth respectively. Delong lost the thirdplace match by 3-2 decision to Eaton Rapids’ Brayden McNamara, after also being pinned by Sparta’s Alec Rees at 5:19 in the semifinals. Prior to the losses, Delong won a 6-2 decision over Williamston’s Wyatt Mazich in the quarterfinals.

Yost defeated Sparta’s Bailey Troeger in the fifth-place match by injury default. Yost also pinned Fordson’s Ahmed Chami at 2:41 in the consolation semifinals and pinned Owosso’s Jacob LaPain at :36 in the second consolation round. Yost lost in the quarterfinals by fall at :41 to Eaton Rapid’s Caleb Fish.

BOWLING: The Carman- Ainsworth girls’ bowling team took sixth at Tuesday’s Saginaw Valley League Jamboree with 17 while the boys were eighth with 12. Individual scores were not reported prior to press deadlines.

The Cavaliers were at both Gerlach Lanes in Lapeer and Roll-A-Way Lanes in Davison. The girls placed first with 30 at Gerlach while only getting a 2.5 at Roll-A-Way. The boys were second with a 28 at Roll-A-Way but registered only an eight at Gerlach. Individual scores were not reported prior to press deadlines.

At Alert Lanes in Essexville last Thursday, the girls put up 18 points for fifth place while the boys had 13 for seventh at the fifth SVL Jamboree. Individual scores were not reported prior to press deadlines. – B.P.