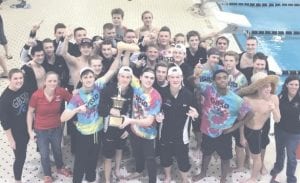 FENTON – The Carman-Ainsworth boys’ swim competed against 10 teams on Friday and Saturday in the annual Genesee County Meet held at Fenton, where they finished sixth with 114 points. Carman-Ainsworth did not have any eligible divers for Thursday’s diving competition. Divers are required to have 11 dives. Grand Blanc finished first with 588.5, picking up its 27th title in 28 years. Fenton was second with 435, Flint Powers third with 296, Swartz Creek/Flushing fourth with 172, Davison fifth with 125, Ortonville Brandon seventh with 101, Corunna eighth with 98, Kearsley ninth with 94.5, Holly 10th with 93 and Lapeer 11th with 85.

Nathan Ratynski, Wyatt Pangerl, Brennan Robertson and Carson Koegel finished seventh for Carman-Ainsworth in 1:58.72 in the 200 medley relay. Robertson, Pangerl, Cook and Koegel were fifth in 1:41.70 in the 200 free. Connor Heaton, Andrew Fox, Cameron Koegel and Ratynski were 10th in 4:24.73 in the 400 free relay.

The Cavaliers are back in action on Feb. 3 at home against Midland.