Cavaliers firing on all cylinders 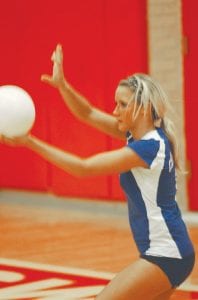 BATTLE CREEK
— Carman-Ainsworth volleyball coach Barb Hurand knew she had a talented squad but thought it might take some time for the girls to play together. She was right as the team got off to a 0-7-1 start in the month of August. When the calendar turned, so did Carman’s play as the team currently sits at 9-9-1, following the Cereal City Invitational at Battle Creek last Saturday.

One possible reason for the team’s slow start is the new practice regimen Hurand has the team on. She noticed her team was getting fatigued toward the end of matches last season so she was proactive coming into this season as she implemented a new training schedule that would keep her team fresh at the end of games. It seems to be working after a slow start.

The semifinals pitted Carman against Battle Creek St. Phillip and the Cavs lost, 25-11, 25-23. Kamrin Gold led the attack for the Cavs as she finished the day with 55 kills, 39 digs, 38 assists, 10 blocks, 30 service points and 15 aces. Aarin Townsend had 37 digs, 12 kills and five blocks, while Kylie Schneider added 38 digs and Danielle McClung chipped in with 29 service points and 52 assists.

Gold once again led the way for the Cavs with 16 kills, nine assists, three blocks and nine service points. Schneider made 15 digs, McClung had 21 assists and Re’Onna Harris and Brandi Rimmer added six kills and three blocks each.

The Cavaliers return to the court tonight when they travel to Big Nine favorite Flushing.

Hurand believes her squad has a chance to compete for the conference crown and it begins with the defending champion Raiders. On Saturday, the team will return to Flushing for the Flushing Invitational.