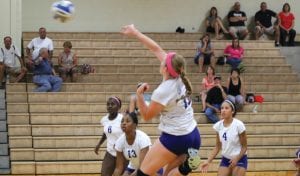 Carman-Ainsworth’s Jessica McClung goes up for a kill during a match with Durand earlier this season.

DAVISON — The Carman-Ainsworth volleyball team enters No. 9-A district play at Davison with an overall mark of 21-16-3.

Lapeer West coach Mary Haslinger likes her squad’s chances in this district, especially after beating Carman-Ainsworth in three sets on Sept.10, and edging out Lapeer East in five sets on Sept. 17. West lost the Metro League title to Fenton on Tuesday in three sets after being deadlocked with the Tigers for weeks.

“Our team’s expectations and goals are to win the district tournament,” said Haslinger. “We have been working hard to develop a balanced attack to keep opponents off balance. We have a solid defense and good setting, and we work to attack from multiple positions. Our focus all season has been to win the league and the district title to add a “13” to the volleyball banner in the gym. We want the last Lapeer West volleyball team to be memorialized for the championships they contributed to the Lapeer West legacy.”

Creek coach Nellie Guajardo has seen growth and maturity in her squad since August, with a recent title win at the Bendle Invitational on Oct. 19. The squad has several veterans, among them setter Macey Clement and hitting leaders Jenna Davis, Lauren Black, Ally Skinner, Madi Wolfe and Meghan Bleck, who routinely lead the stats charts.

Other teams competing for the title are host Davison, which is 25-9-5 overall and the three-time district champ, Lapeer East, which finished 6-2 in the Metro League, and Kearsley, which finished 3-5 in the Metro. The Eagles will face Kearsley at 5 p.m. Monday with the winner going on to face Davison at 5 p.m. on Wednesday.

“The chemistry is really good with the team right now,” Davison coach Tiffany Burghdorf said. “They work really well together.

“I would like to see our intensity and movement increase. It will be a good district. All the teams are competitive.”

The Cavaliers have recently posted a pair of impressive five-set wins against Midland and Flint Powers. Carman- Ainsworth coach Barb Hurand decided not to point out any specific individual statistics, preferring to keep the focus on the team concept instead.

“I feel in order for us to do well we need to focus on being a team,” Hurand said. “We look forward to competing and hope that as a team we do so.

“Our motto is there is no I in team. We win or lose as a team. Each of my starting players have the potential to have a big game on any given night, and hopefully enough of them will do so during the districts.

“We need everyone to focus on their positions and take care of their game so that we are successful as a team.”