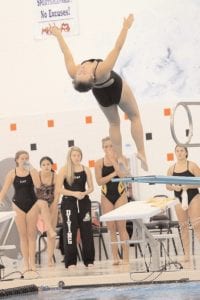 Carman-Ainsworth’s Kayla Seeley works through the lane in one of several races she was instrumental in.

FENTON — Amidst a 10-team field at the Genesee County Swim and Dive meet hosted by Fenton last Thursday, Friday and Saturday, Carman-Ainsworth placed fourth with 179 points. Coming in first was Grand Blanc with 650 points, which picked up its sixth straight County title. Fenton was second at 353 and taking third with 250 was Brandon. Kearsley/Clio was fifth at 171, Powers had 163 and Davison was seventh with 139. That left Swartz Creek in eighth at 135, Lapeer had 80 and Holly posted a 64.

“Lapeer is down. They graduated a bunch of girls last year,” said Carman- Ainsworth/Flushing coach Kevin McGlashen. “They’re a team that’s going through a rebuilding phase at the moment, which actually allowed us to swim some girls in places we’ve wanted to swim them in, but didn’t have the opportunity to because we didn’t know how they’d perform. We got to see some good things. We’re happy with what we saw.”

Carman-Ainsworth takes on Davison at Kearsley tomorrow in a Saginaw Valley League-South meet.