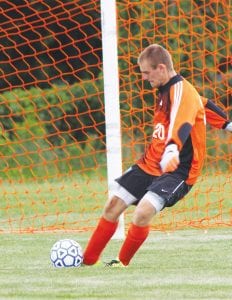 Goalie Ray Macko puts the ball in play for Carman-Ainsworth.

FLUSHING — Because of field conditions, the Carman-Ainsworth varsity soccer game on Tuesday was canceled. The team’s game on Sept. 2 at home against Flint Metro League and Genesee County rival Kearsley was also postponed because of weather and no makeup date has been announced.

The Cavs host Owosso for a non-conference game today. — M.S.