Cavaliers gear up for volleyball districts 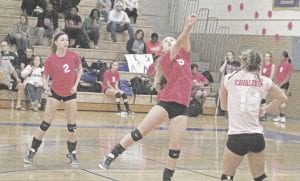 Carman-Ainsworth’s Katie Speaks follows through on a dig, while Hannah Thurston (2) and Morgan Sherrer sit ready for action on October 12.

The entirety of the first round will be hosted by the higher seed with the semifinals and district championship played at Flushing.

On the other side of the bracket, Fenton (8-0 Metro League) hosts Flint. The winner will take on host Flushing (5-2 Metro League), which was awarded a bye into the semifinal round.

Both semifinal matches will take place at Flushing on Wednesday, Nov. 1 starting at 5 p.m. with the Flushing match directly following at 7 p.m.

The district championship will be played on Thursday, Nov. 2 at 7 p.m. with the winner advancing to the regional semifinal.