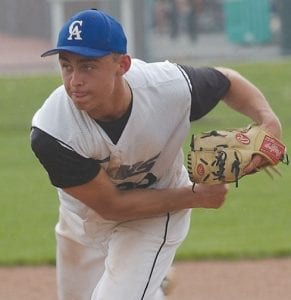 FLINT TWP. — The Flint Powers varsity baseball team was able to wrestle away the first game of a Big Nine doubleheader from Carman-Ainsworth on Monday, 15-5, only to see the Cavaliers come back and swipe the second, 12-9.

With the Chargers scoring 11 runs in the second inning of game one, Jake Weissend gave a solid effort for Carman-Ainsworth with two hits and two RBI. In a season where victories have been hard to come by, the nightcap was quite the feather in the Cavaliers’ cap, coming back to take control after allowing six runs in the first two innings of the contest.

“After a rough start I was pleased at how we fought back today. Senior Nick Hill really pitched well after a rough first two innings, giving up six runs but settling down to give up three runs after that. He kept the Powers batters off balance and benfited from finally some good play in the field,” said coach Tom MIller. “The Carman-Ainsworth bats were also alive, getting some big hits with runners on. Anytime we have had runners on we never get that big hit that gives us four or five runs in an inning. Today that happened. Also, having Jake Weissend back in the lineup really added boost. Jake was out last week because of grades. He is an important leader in our lineup.”

In a pair of contests originally scheduled for April 18, Carman-Ainsworth fell to Flushing in a Big Nine twin bill last Friday, 11-0, and, 10-1.

“(Carman-Ainsworth was) again bitten by the error bug (but still) played very well in game one,” Miller said. “Pitcher Jamaal Dixon gave up two runs through the first three innings, (then gave) up only one hit. (Carman-Ainsworth) was down 2- 0 going into the fourth, but Flushing scored nine times in the bottom of the fourth, only two were earned, to give Flushing an 11-0, five inning mercy. Flushing out-hit (the Cavaliers) only four to two.”

In the second contest, Flushing jumped out to leads of 4-0 and 8-0 at the end of the first and fourth innings en route to the nine-run win, including an early solo home run by shortstop Justin Fisher that opened the scoring. For the game Fisher had two home runs and four RBI for the Raiders.

Non-conference competition was the theme when Carman-Ainsworth played two at Blue Water Area Conference rival Richmond last Thursday, losing the initial matchup, 18-7. The difference in the contest for the Blue Devils was the 15 unearned runs they scored after Carman- Ainsworth took a 3-0 lead in the top of the second inning. Topping the charts for the Cavaliers was junior Jeff Wilhelm on an RBI single with no outs in the second inning, sophomore Justin Hubbard laid down a single, a double and two RBI and putting up two hits and two RBI was Jeff Wilhelm.

“Again, the big unearned inning haunts the Cavaliers,” Miller said. “In the bottom of the second Richmond posted eight unearned runs and the Cavaliers committed four of their 12 errors.”

The nightcap saw Carman-Ainsworth on the wrong end of a 6-1 decision to Richmond despite taking a 1-0 lead in the first inning when Justin Hubbard drove home Moran on a sacrifice fly.

“Richmond scored an uneared run in the second to tie Carman-Ainsworth. Again, three errors in the third gave them three runs, (putting) Richmond ahead 4-1 after three innings. The lone earned runs were given up by junior pitcher Colin Heaton in the fourth when Richmond shortstop Richard Boyd hit a two-run home run to give Richmond a 6-1 victory in five innings,” said Miller. “(Cavaliers) pitcher Colin Heaton gave up three hits and had three strikeouts with one base on balls.”

“I will say we are mentally beaten up. We are a much better team than our scores indicate. As a young team we have to take the small victories before we can walk. We have been competitive until we give up the one inning of those extra outs with those unearned runs,” Miller said. “We have averaged nine to 10 unearned runs in the game during this stretch. We know during this stretch it has been us beating ourselves, not by our opponents.”