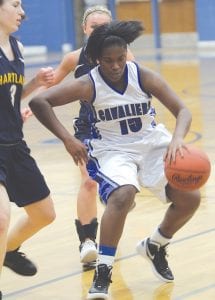 Carman-Ainsworth’s Kapri Thompson put her back to the competition.

FLINT— The Lady Cavs had a bit of a hiccup on Friday night at Flint Powers Catholic. The two long-time Big Nine rivals, and soon to be foes of the Saginaw Valley Conference-South, battled it out with the Chargers coming out on top, 59-51.

Carman-Ainsworth began with an early advantage, jumping out to a 16-6 lead after the opening period. The Chargers then struck like a bolt of lightning in the second quarter, and evened things out before halftime, 29-29. The Cavs edged out Powers in the third frame, before the Chargers went on a 20-7 run in the final stanza.

Now at 4-11 overall, the Carman- Ainsworth girls’ hoops squad will get a bit of a breather before hosting Holly on Tuesday.

Kapri Thompson has also been a force for the Lady Cavaliers on the road this season, as witnessed in this game at Davison earlier in the year.