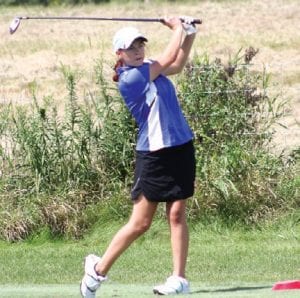 FLINT TWP — Hosting nonleague foe Linden on Tuesday, the Carman-Ainsworth girls’ golf team narrowly fell to their non-league foes, 205-208. Meghan Borgerding led the way with a score of 52 while Alanna Gleason and Mikaila Garrison each ended the day with 52s. Linden was led by Hannah Joslin’s 43.

The Lady Cavs traveled up to Saginaw Arthur Hill on Monday for the Saginaw Vallley League North- South crossover tournament, coming in fifth with 236. Midland Dow won the meet with a 170, Davison came in second with 182 and Flushing was third with a 195. Just underneath the Cavaliers was Flint Southwestern Academy. Borgerding recorded the top score for the Cavs with a 48 while Garrison shot a 57 and Gleason carded a 59.

The Carman-Ainsworth girls’ golf team competed at the 17-team Davison Invitational on Friday, carding a 449. Borgerding was the leader for the Cavs, shooting an 85 while Garrison followed her up with a 105. Gleason recorded a 118 and Taylor Jarnigin came through with a 141.

The Lady Cavs hit the road to Heather Highlands on Friday to face off with non-league foe Holly, falling to the Bronchos, 200-213. Borgerding continued her stellar season by carding a 44 while Jarnigin chipped in with a 55. Garrison and Gleason each rounded out the scorecard with 57s.

The Cavs travel to another SVL Meet on Monday, hosted by Flint Powers Catholic. — B.P.