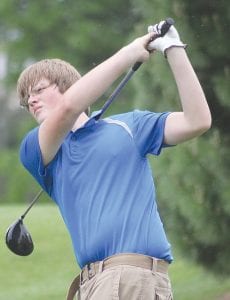 The sophomore shot 92 on a breezy day, falling just short of the sixth and final individual qualifying score of 85. The top six teams and top six individuals not on those teams advanced to the regional tournament today at Boulder Pointe in Lake Orion.

Swartz Creek won the district with a 314 total, two strokes better than Traverse City West. The other team qualifiers were Midland Dow with a 321, Saginaw Heritage with a 331, Traverse City Central with a 332 and Midland with a 333.