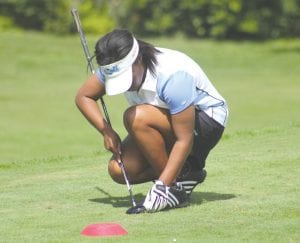 SAGINAW— The Lady Cavs were in action last Thursday for a Saginaw Valley League jamboree at Sawmill Golf Course in Saginaw. Carman- Ainsworth placed sixth at the meet with a 405. Davison won the whole thing with a 359, while Flushing came in second with a 361.

Midland’s total of 377 landed them in third place and Flint Powers Catholic was fourth with 390. Midland Dow was just ahead of the Cavs in fifth with a 380. Meghan Borgerding was the top shooting Cavalier on the day, scoring an 88. Mikaila Garrison was able to muster up a 103 and Selena Johnson and Aulbany McComb each totaled a 107. Carman-Ainsworth competed at a Jamboree at Fenton Farms golf course yesterday following our press deadline. — B.P.