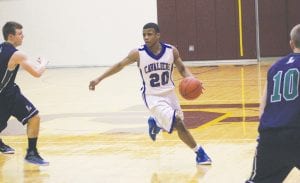 Ja’Kavien Lewis, a five-foot-9 sophomore guard, would have faced the best talent in the state at Reaching Higher.

MILFORD — For high school athletes looking to take their game to the next level, the experience has just as much potential to become a life-changing adventure as it does an unmitigated disaster. That’s why the Michigan High School Athletic Association and the Basketball Coaching Association of Michigan have teamed up to offer those boys and girls a step in the right direction by way of this month’s Reaching Higher event.

Locally, Carman- Ainsworth’s Ja’Kavien Lewis was invited and on the roster, but did not participated in this July 15 clinic, which lasted almost six-hours.

“He actually did not go. He was in Ohio,” said Cavaliers head coach Jay Witham.

Billed as, “A unique experience for select student-athletes looking to Reach Higher on the hardwood,” according to a joint press release, the concept is to give these individuals practical knowledge on how to find success in the transition from high school to college. This includes not only the athletic and academic aspects of what lies ahead, but social issues, as well.

“Participants are nominated by their high school coaches. From those nominations the BCAM has a committee to select the participants,” said Imlay City varsity head coach Don Gauthier. “They don’t keep track of stats at the event.”

With a practice plan that featured half court offense, set plays and team defense, Reaching Higher began with registration and group photos for the first hour or so followed by a 10 minute introduction from University of Michigan NCAA Compliance Speaker Elizabeth Heinrich. While the next slot was to feature an athlete TBA, Detroit native and current Orlando Magic guard Willie Green then took the stage.

The Reaching Higher format then turned towards the court with a message from the coaching staff, warmup, team assignments and a 40-minute practice. This set the stage for another 40 minutes featuring five eight-minute workstations proceeded by three game sessions and two Gatorade breaks.

“Logan has the skill set to compete at the next level. said Raiders head coach Adam Smith. “He has the quickness and ball handling abilities to compete against the best players in the state and is working on his shooting abilities to make him more well rounded.”

The girl’s portion of this camp is scheduled for July 23 and Lapeer’s Samantha Thick will be among the attendees. As for Alderson, he plans to attend Clarkston High School in the fall.

“This event is a combination of meetings, drill work, and then scrimmages,” Smith said. “With the exception of MSU, I saw representatives from every school in MI and most schools had several coaches from each staff.”