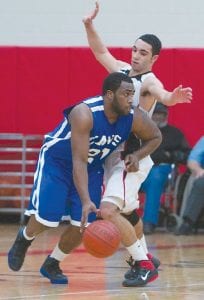 GRAND BLANC — Maybe Carman-Ainsworth shouldn’t have beaten Grand Blanc so badly the first time they met in basketball this year.

Grand Blanc had all the motivation in Tuesday’s rematch and beat the Cavaliers, 67-62, in a nonleague game on the Bobcats’ court. The win avenged a 72-47 thrashing that Carman administered in the season opener Dec. 7.

It was also the Cavaliers’ first loss this season after they opened with five straight wins.

Cavs coach Bob Root knew right after the first game that this rematch would probably be more difficult.

“We have to go to their gym the first game in January and it could be a different story,” Root said at the time. “Grand Blanc has a very good team. Just the fact that they got behind early took them out.”

Carman-Ainsworth jumped ahead early in this one, too, just as it did a month ago. The Cavaliers took a 21- 16 first-quarter lead and extended it to 34-28 at halftime.

But Grand Blanc took control with a 19-9 third quarter. The Bobcats opened the half on a 7-0 run and took the lead for good at 42-41. They led by 10 points twice in the fourth quarter.

Carman closed within 65-62 on a three-point play by Denzel Watts with 10 seconds left, but Grand Blanc iced it with two free throws four seconds later.

Watts finished with 22 points and Anton Wilson led the Cavaliers with 24 points on 5-of-8 shooting from 3- point range. Desmond Morris added nine points.

Carman will remain in non-league competition for its next two games, hosting Troy Athens on Friday and visiting Bridgeport next Tuesday. The Cavaliers will begin Big Nine Conference play next Friday, Jan. 14, at Flushing.