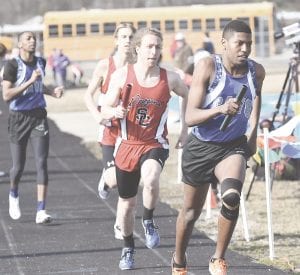 Carman-Ainworth’s Joe Chin-Kee-Fatt sprints by a Swartz Creek opponent at the Kearsley Relays on April 5. Photo by Brandon Pope

The Carman-Ainsworth boys are led by senior Trent Barron, who was an All-Stater last season and is one of the top runners in the state in the 400. He ran his season’s best of 49.34 in the 400 at the Goodrich Invitational on May 3. He is also a threat in the 100 with a personal record of 11.39 and the 200 with a PR of 22.22. The Cavs’ other top sprinter is senior Randall Broome, who set his PR of 11.13 in the 100 on April 27. He runs the 200 and throws shot put and discus. Barron additionally leads the Cavalier relay teams, all of which are a threat to qualify for the state finals. The team of Barron, Jamarius Davis, Terrence Muex and Jack Carter ran their season best of 3:26.56 in the 1,600 Relay at the Davison Twilight Classic last Friday. Broome also frequently runs in the relay events for Carman-Ainsworth. Carter and Joe Chin-Kee-Fatt are two of the Cavaliers’ best mid-distance runners. Chris Coleman is also one of the team’s top sprinters.

The Lady Cavaliers have a deep stable of sprinters, including Kivonna Thompson, Amariyah Conway, Jakarra Nelson, Symone White, Alexis Collins, Areyanna Harrison, Kierra Gillard and Ashanti Baxter. Nelson, Thompson and Harrison lead the team in the 100, topping out at 13.50, 13.53 and 13.54 respectively. Rayven Brantley and Ayianna Massey are the Lady Cavaliers’ top distance runners. Brantley finished the 800 in 2:35.85 at the Twilight Classic, her season’s best. Massey ran her personal best of 6:32.71 in the 1,600 during Monday’s SVL-South Jamboree.