Cavaliers hit the hardwood on a mission 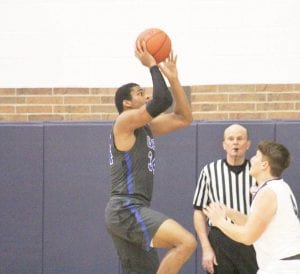 Michael Fletcher, shown here during Tuesday’s win over Lapeer, is expected to be one of the top players in the state this season. Photo by Joe Oster

FLINT — With a blend of returning talent and fresh faces, the Carman- Ainsworth basketball team is poised for a deep run in the state tournament, but they’ll have to do it without Ja’kavien Lewis, the team’s leading scorer and playmaker a year ago. Still, the Cavaliers enter the season as a serious title contender.

“The goals never really change,” said Cavaliers’ coach Jay Witham. “It’s always to win your league, win your district and get to the Breslin. That’s always the goal. The by-day goal is to get better each and every day. We haven’t been doing that in practice and have to get better at it.”

The Cavs return many key players from last season’s squad that lost to eventual-champion Clarkston in the state quarterfinals, including the Fletcher brothers.

“Michael obviously is a four-year guy, and Dustin is a three-year guy,” said Witham. “They’ve got a lot of experience underneath their belt. They’ve been in big games.”

Michael, a big man who can also play outside, was ranked as the ninth best player in the entire state, according to the Detroit Free Press.

Witham was also hoping for a leap from Jayden Nunn, and he’s done just that, leading Carman-Ainsworth in scoring in two of the first three games.

“Jayden Nunn is only a sophomore, but he played a lot of minutes with us last year behind JK (Lewis) and O’Mari (Duncan),” said Witham, referring to the pair who graduated last season. “He got his feet wet there. We’re looking at him to lead our guys.”

Donnal Conway, a scorer with a nice handle, will provide some leadership and consistency, while Witham figures out his rotation. The addition of the freshmen tandem of Mehki Ellison, an undersized point guard, and Isaiah Jones, an athletic wing, have added depth, as well.

“A lot of the other guys are filling in some roles for us,” continued Witham. “We are trying to figure out who that next ballhandler is, whether it’s my freshman Mehki (Ellison) or Donnal (Conway) or even Isaiah (Jones) or one of the numerous guards that I have. So, we’re looking for a couple pieces that we’re missing.”

Carman-Ainsworth’s road to Breslin will be a tough one in the Saginaw Valley League, which includes a dangerous Davison team, feisty Lapeer and Grand Blanc, which was ranked third in the state heading into the season.