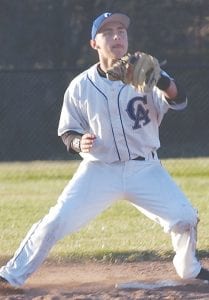 Carman-Ainsworth’s Justin Hubbard made a infield.

FLINT TWP. — Things didn’t go so well for the Carman-Ainsworth varsity baseball team when Flushing came to town on Monday for a Big Nine doubleheader. The Cavs lost the first game, 14- 1, in six innings after nine unearned runs broke open a 5-0 game in the sixth inning.

Leading the hit parade for the Cavaliers was junior Chris Moran with a trio of singles. The second matchup didn’t go much better as Carman- Aisnworth was downed, 19-0, in three innings, as the Raiders got three hits each from Justin Fisher and Matt Webster.

“Flushing score eight runs in the second and nine runs in the third. Again, errors contributed to both losses.

(Carman-Ainsworth) was no hit in the second, said coach Tom Miller.

“Carman-Ainsworth now features a lineup that can have five sophomores and a freshman in the nine man line-up . We just seem to find one inning which we give them extra outs. If we play a clean game, all games would have been much closer. We must stop giving up eight or nine unearned run innings.”

In a contest originally scheduled for April 26, the Cavaliers were at Powers for a league twin bill last Friday and got beat, 11-1, in the initial matchup.

“The young Cavalier baseball team has been stuggling in the field with one big inning. Friday night was not any different. In game one Powers scored seven unearned runs; three in the fifth and sixth for Powers to mercy them 11-1,” Miller said. “Powers out-hit the Cavaliers, 8 to 5. Carman-Ainsworth had two hits and an RBI from junior Chris Moran, Justin Hubbard had a triple, Brett Dortch had a double and Nick Hill and Jamaal Dixon each had a hit. Carman-Ainsworth left seven runners on base. Powers benefted from Ethan Wiskur’s two-run homerun and Conner Tuohy’s two double’s and two RBI.”

The Chargers also took game two, 11-0, after the Cavaliers gave up 10 unearned runs in the third inning.

“Carman-Ainsworth commited four errors to start the third,” said Miller. “In the play in the third Inning Powers Ethan

Thursday and beat the Cavaliers, 7-1, in game one.

“The Cavalier’s let a great pitching performance by junior Colin Heaton go to waste as he pitched six innings, giv- ing up six hits, two earrned runs (and two strikeouts). Sophomore’s Grant Roe and Justin Hubbard and junior Jeff Wilhelm all had lead off doubles, but only Grant scored,” said Miller. “Brandon scored four unearned runs in the bottom of the sixth to break open a close 3-1 ball game. The young Cavalier defence that can now feature five sophomores and one freshman in the line-up had three errors in the sixth. That gave Brandon the exrta runs.”

In the second contest Carman- Ainsworth kept things much closer before getting edged out, 7-6, after taking a, 6-2, lead going into the third inning.

“Again, the Cavalier defence let down a great pitching performance by senior Nick Hill, who pitched 5-1/3 innings, giving up just five hits and three earned runs,” Miller said. “Tied in the bottom of the sixth, Brandon right fielder Jeff Crawford hit a solo home run (that led) the Blackhawks to victory. Carman- Aisworth was led by junior Chris Moran, who had two hits, while pitcher Nick Hill Reached base three times and scored twice. The Cavaliers outhit the Blackhawks eight hits to five.”

Having played only three games in April, Carman-Ainsworth, 2-7 overall, will play 20 games in a 24 day span, including a twin bill at Richmond today.