Cavaliers improve to 5-0 in league with win over Davison 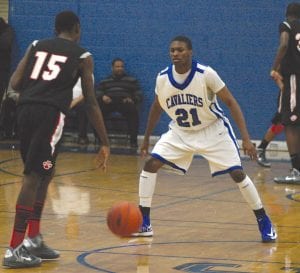 Against the Cardinals, Carman-Ainsworth used a 21-13 advantage in the first quarter to build a lead they would not relinquish. A 10-8 edge in the second quarter gave the Cavs a 31- 21 lead at halftime. The Cardinals tried to close the gap with a 20-16 edge in the third quarter but the Cavaliers responded by winning the fourth quarter, 18-15.

On Jan. 4, the Cavs traveled to Flint Southwestern and pulled out a 64-63 overtime victory over the Knights.

Carman-Ainsworth once again started fast with a 19-10 lead after the first quarter. The Knights closed the gap with a 16-10 edge in the second qaurter to trail, 29-26, at the half.

Southwestern outscored the Cavs, 17-13, in the third to take a one-point lead into the fourth quarter but Carman-Ainsworth edged the Knights, 18-17, to force overtime. The Cavs edged Southwestern, 4-3, to earn the victory.

Watts was the leading scorer for Carman-Ainsworth with 24 points, Morse added 13 and Malik Seales chipped in with 12.

In a rematch of opening night, the Cavs traveled to Grand Blanc on Jan. 2 and once again suffered a loss, this time, 56-49. The Cavs are 0-2 against the Bobcats this season and 5-0 against everyone else.

The Cavs led, 11-8, after the first quarter but the Bobcats responded with a 22-7 advantage in the second quarter. Carman-Ainsworth could not recover despite a 17-16 edge in the third quarter and 14-10 in the fourth.

Leading the Cavs was Watts with 15 points, seven rebounds, three assists and three steals and Jaylen Randle and Morse each chipped in 10.