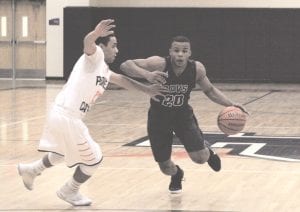 FLINT – Carman-Ainsworth boys’ basketball picked upped its most impressive win of the season to date with a 52-45 victory over Saginaw Tuesday night.

The Cavaliers got off to a fast start by outscoring Saginaw 13-4 in the opening quarter. Carman-Ainsworth stretched its lead to 10 at 27-17 with a 14-13 scoring edge in the second.

Saginaw trimmed its deficit back to seven with a 10-7 scoring edge in the third. But the Cavaliers matched Saginaw point for point (18-18) in the final eight minutes to pick up the win.

“We played solid man-to-man defense with Aaron Williams doing a great job denying Qua Southward and O’Mari Duncan on Henry Speight while the others played good help defense,” Carman-Ainsworth coach Jay Witham said. “We did a good job of taking care of our paint in the first quarter.”

The Cavaliers led 27-20 after the first quarter and held a 47-33 lead at the break. Carman-Ainsworth held a 25-19 scoring edge in the third and a 32-18 scoring advantage in the fourth.

“The tempo of the game fit our style plus we knocked down some outside shots,” Witham said. “It was nice to see in that type of a game we were unselfish and shared the ball.”

Six different players hit for double figures for the Cavaliers. Lewis had 22 points, four rebounds, three steals and an assist.

The win raised the Cavaliers overall record to 10-1. The Cavaliers, 11-1 overall, travel to Lapeer Friday. – K.W.