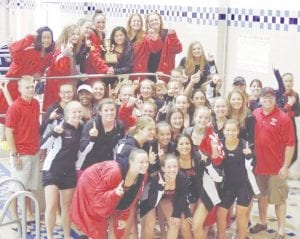 ORTONVILLE — The Carman-Ainsworth girls’ swim team struggled in the Genesee County Invitational meet, swimming with only seven girls this season, and failing to make it past any of their preliminary heats. The team finished the meet scoring 24 points and placed last out of 11 schools.

The Grand Blanc girls’ swim and dive team succeeded in earning its 10th consecutive title at the Genesee County Invitational Thursday- Saturday at Brandon High. Grand Blanc won with 654.5 points, Fenton was second with 502.5 and Flint Powers was third with 217. Davison was fourth with 191, Lapeer was fifth with 166 and Swartz Creek/Flushing seventh with 133. Brandon was seventh with 114, Kearsley-Clio eighth with 81, Holly ninth with 76, Corunna 10th with 63 and Carman-Ainsworth 11th with 24. – K.R.