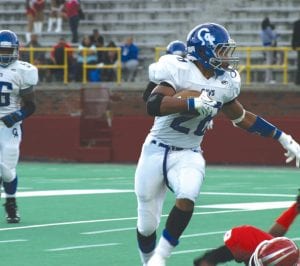 Gerald Holmes gallops for some of his 122 yards on the fast turf at Atwood Stadium last Friday.

The Cavaliers thrashed Flint Northern, 55-8, scoring six touchdowns in the first half and played the entire second half with a running clock. The fourth-ranked Cavs improved to 4-0 overall and started off at 1-0 in the Saginaw Valley League’s South Division.

It was only the third time Carman- Ainsworth has faced a Flint city school since the Carman and Ainsworth school districts merged in 1986. The previous two games, a win over Southwestern in 2009 and a playoff win over Central in 1999, were both at Carman-Ainsworth.

The Atwood Stadium turf only enhanced the Cavaliers’ speed, as they rolled up nearly 300 yards, 244 on the ground. Gerald Holmes had 122 yards and three touchdowns on just 10 carries, and Malik Seales added 88 yards and a touchdown on six tries.

For the fourth straight week, Carman-Ainsworth scored on its first possession. In two of those games, the Cavs scored on their first play from scrimmage, and it would have been three if Demarion Allen’s 57-yard touchdown run hadn’t been called back for holding. Instead, the Cavs scored on their third play, with Connor Storms throwing a 44-yard touchdown pass to Brandon Walker with 6:46 left in the first quarter.

The Cavs quickly pulled away in the second quarter, with Nate Williams scoring on a seven-yard run at the 9:46 mark and Jevonte Alexander returning an interception 16 yards for a score at 9:04.

Holmes tacked on a three-yard touchdown with 2:42 left in the half, and Seales returned a blocked punt 10 yards for another score at 1:34. Storms kicked his sixth extra point of the half for a 42- 0 lead at intermission.