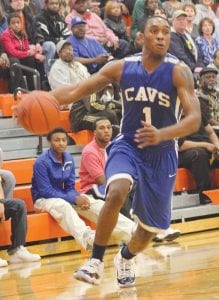 Denzel Watts (#1) drives to the basket for the Cavaliers.

Bob Root returns for his 20th season at the helm of the Cavaliers and his 26th year overall as a coach. Carman-Ainsworth finished last season with a 14-8 overall record.

Root has the fortunes of having All-State guard Denzel Watts returning for his senior season. The four-year varsity player will play his college ball for the University of Alabama-Birmingham next season.

“(We are) strong at the guard position,” Root said. “We are a very small team, but have six players with varsity experience.

“All three city teams will be tough along with Davison, Powers and Flushing. I think the league is very balanced with no clear favorite. We must rebound well as a team and defend well to be successful. (We) must improve (our) work ethic. If we can outwork other teams, we have enough talent to be successful.”