Cavaliers look to bounce back from sub .500 season 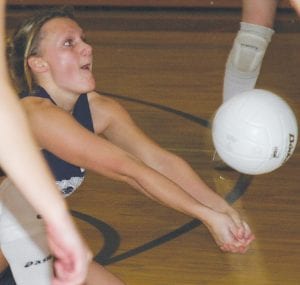 Area high school volleyball teams prepare to dig in for a long season that hopefully takes them into the postseason.

FLINT TWP.
— The Cavaliers were winless in the Big Nine Conference last season and will look to rebound this season with a wealth of talent returning and a welcome transfer from Grand Blanc. Barbabra Hurand enters her 21st year of coaching with the last 20 coming at the helm of Carman-Ainsworth.

Replacing three starters and one specialist will be a big priority for Hurand this season. First Team All-Big Nine selection Brittney Rice is gone. The 6-footer was the middle blocker for the Cavaliers. Setter and defensive specialist Michelle Fisher, defensive specialist Trisha Wheeler and right side hitter Taylor Storms have also moved on.

Six-foot-one outside hitter and setter Kamrin Gold returns to lead Carman. The junior was an All- Conference and All-Region player last season. Kylie Schneider will begin her second season on varsity as the Libero. The junior was honorable mention All-Big Nine last year. Do-it-all junior Re’Onna Harris returns as does senior middle blocker Brandi Rimmer, senior outside hitter Aarin Townsend and junior setter Danielle McClung. Harris will spend time as an outside hitter, middle hitter and setter.

New players to keep an eye on include sophomore Monica Townsend who is a defensive specialist and junior middle blocker Kristina Dik, who looks to replace Rice. Grand Blanc transfer Miya Ingram will play her final season for the Cavs as an outside hitter.

“The league should be very tough again this year,” said Hurand. “Until someone beats Flushing they are the team to beat as they are returning champs.” Hurand also mentioned Davison should be as competitive as ever and Powers will be good again even though they graduated quite a few players and will have a new coach for the second straight year. Hurand and the Cavs went winless in league last year but she expects that to change this season.

“I expect us to win a lot of games this year,” she said. “We have been working really hard in practice and hard work will eventually translate into victories. I can feel the hunger from the kids at practice. They want to get better and they want to be coached up. We have very good team chemistry this year.”