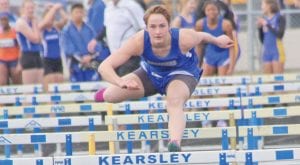 FLINT – Carman-Ainsworth has been a force in boys’ track and field for a number of years now.

And it looks like the Cavaliers have another great group this year. Carman- Ainsworth will compete with 15 other teams at the No. 10-1 regional at Davison Friday.

The Cavaliers should be very comfortable in their surroundings. Carman- Ainsworth ran at Davison Friday and Monday.

The Cavaliers have a number of runners who have a real shot at making the state finals. The top two in each event or those making a state qualifying time move on to the state meet.

Topping the list is Chris Sylvester, who won the 100 and 200 at the Davison Cardinal Twilight Classic Friday.

But Sylvester isn’t the only sprinter to watch. Kyle Mason was second in the 200 behind Sylvester and won the 400 at the same event.

Cahlil Brownlee will be a factor in both the 110 and 300 hurdles. He was second in the 110 hurdles and took the top spot in the 300 hurdles at the Classic.

Carman-Ainsworth also has quality throughout its relay teams. With runners like Sylvester, Keith Franklin, Aaron Williams, Randall Broome, Mason, Joe Steart and Juwan Willis making up a couple of the quartets, the Cavaliers will be threats to win both the 400 and 800 relays.

Carman-Ainsworth should also play roles in a couple of the field events. Romeo Evans is the Cavaliers’ best shot putter while Khalil Johnson will have a say in the final standings in both the discus and the shot.

Zairreon Madison could be a factor in the long jump and Wyatt Pangerl could have a say in who wins the high jump. There’s no doubt the Carman-Ainsworth boys are loaded and ready to run.

The Cavalier girls are a very young squad. But they have been progressing nicely as the season has moved along.

Laura Depew, Tamaria Jones and Falon Fletcher could all challenge in several of the field events. Carman-Ainsworth also has a couple of relay teams that could make the grade.

The best of the bunch could be the 400 relay quartet of Harmany Williams, Destiny Morris, Dejene McNair and Aleah Mixon. But the 800 relay foursome of Raigan Davis, Areyanna Harrison, Mixon and McNair shouldn’t be ignored either.

Carman-Ainsworth should once again have plenty of runners and throwers reach the state finals. It’s only a matter of how many Cavaliers will qualify for the event. – K.W.