Cavaliers look to get over the win-loss hump 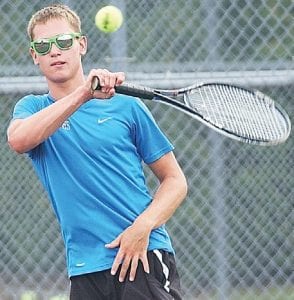 FLINT TWP.
— This could be the year that the Carman-Ainsworth varsity tennis program finally makes it to the top of the Big Nine standings.

Not looking past Flushing, the top dog in the conference from last season, the Cavs have experience and a no cut policy that coach Bob Chunn hopes will encourage more players to pick up a racket.

“I retired in 2002, was an assistant coach in 2002 and took over the program in the 2003-2004 timeframe,” Chunn noted. “Last year we had four wins, five losses and one tie to place third in the conference and we were fifth at regionals.”

Because his squad only said farewell to No. 1 Aaron Stanley and No. 4 John Grady, there are some coveted positions up for grabs this season. And, using MHSAA required intrasquad challenges to determine the final line up, Chunn sees another good season on the horizon.

Looking to step up on the roster, No. 2 Singles and co-captain from last year, Eric Skaff hopes to finish his high school tennis career at the No. 1 spot. However, also vying for that roster spot will be junior and last year’s No. 3 Singles player, Cameron Simington. Nine total players will return this season, with co-captain Mujtaba Syed, a senior, looking for his top three slot. Breathing down all of their necks is senior Darrius Jones, a No. 2 doubles player last season. He’s looking to branch out on his own at a singles spot, Chunn noted.

“We’re in the process of doing our competitive matches to see who plays what positions,” Chunn explained. “Key this year at singles will be Skaff, Syed, Simington and Jones. Bijan Torfeh, a senior, will also contend.”

As far as doubles tandems, they are completely up in the air after quite a bit of turnover, says Chunn.

“I have several freshmen who showed up this year, but they are untested this soon into our season. I’d also like to mention that David Daniel is our JV coach this season and we are looking for additional players for the team, so anyone interested we are accepting all comers, no experience necessary.”

Chunn noted that he starts all incoming players from scratch and with a no-cut policy, anyone who comes out to practice stays on the team.

“We abide by the MHSAA rules that says that a competitive playoff has to take place to determine positions. Returning players also have to vie for positions because individuals work hard off season to move up in the positions,” Chunn said. “We had close matches last year that we did not win, so we are certainly looking to improve on that record to be contenders. Flushing is real strong and Flint Powers, too. Flushing always has great numbers so they have a lot of players. Last year we had no JV team, so we are still looking for players to grow our program.”

Aside from Flushing, Chunn says that Grand Blanc, the top dog in this area, will face his squad come regionals. The former Big Nine stronghold has an advantage a lot of club players who play year around.

“We have to be realistic and we go up against some really good teams in our regionals, including Grand Blanc,” Chunn added.

Anyone looking to join the team need only show up at practice from 2:30-4:30 daily or stop by the athletic office. Carman-Ainsworth opens the season today at a quad at Owosso featuring Owosso, the Cavs, Durand and Ovid Elsie.