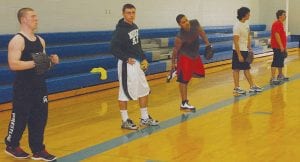 The Carman-Ainsworth baseball team ran through practice drills inside the gymnasium as the weather continues to delay the season start.

FLINT TWP. — After serving a middle school tour of duty that lasted just short of a decade, Tom MIller is once again taking the reins of the Carman- Ainsworth varsity baseball program, a move the team hopes will land them atop the Big Nine standings once again.

“(This is my) first year back as head coach after seven years (away). I was head coach (from) 1999 until 2002 and have been coaching seventh grade baseball since,” Miller said.

With this year’s team being strong at the plate but lacking bullpen depth according to Miller, the Cavaliers will rely on several first-year varsity athletes to help fill in where neccesary. This includes pitcher/catcher/outfielder Jamaal Dixon, catcher Brett Dortch and outfielder Grant Roe, all of which are sophomores.

“(This) team should be able to compete this year,” Miller said. “We have a lack of arms and varsity experience.”

Another issue Carman-Ainsworth will have to try and overcome this season is its lack of upper classmen, creating a void in leadership and direction that can only be filled by returning players such as juniors Nick Hibblen at pitcher and first base, Jake Weissend at catcher and shortstop, Colin Heaton in the infield and pitching, sophomore Justin Hubbard in the infield and outfied, and senior Nick Hill doing time on the mound and in the outfield.

“(The) Cavaliers roster will have a heavy dose of youth with only four seniors on the team. Senior Nick Hill being the only returning senior starter,” said Miller.

That leaves Miller with the daunting task of replacing all the talent he lost to graduation, which includes pitcher/infielder Tyler Hibblen, pitcher/first baseman Jeff Tilley and catcher Tyler Hubbard. Also gone from 2010 is junior second baseman Shane Barron, who instead chose to run with the Cavaliers track and field team this year.

Having gone 15-18 overall last year and finishing third in the four-team Big NIne, Carman-Ainsworth has been assigned to Swartz Creek district No. 3- 1 on May 31-June 4 alongside the Dragons, Flint Northern, Flint Northwestern and league rival Flushing. Regionals then begin June 11 followed by the quarterfinals on June 14, the semifinals on June 17 and the Div. 1 state finals on June 18 at Bailey Park in Battle Creek.

This season the Cavaliers will also have to comply with several rule changes implemented by the Michigan High School Athletic Association. Specifically, according to MHSAA.com, “1) Any non-wood BESR-certified bat will be legal for the 2011 season except for those banned and illegal BESR-composite bats. This list of banned bats is posted on the baseball page at MHSAA.com. 2) Any solid (one-piece) wood baseball bat will continue to be legal in 2011 and beyond. 3) Any aluminum or composite BBCOR-certified baseball bats will be legal in 2011 and beyond.”