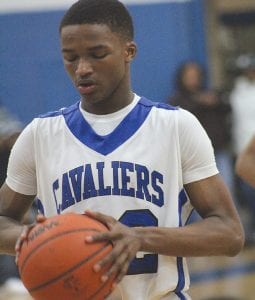 Carman-Ainsworth’s Justice Green takes a moment at the free-throw line.

LAPEER — The Carman-Ainsworth boys’ basketball team received a first-round bye in the Class A district opener at Lapeer West and watched to see who would move on.

Swartz Creek defeated Davison, 70-57, in the district opener on Monday to face off against the Cavs yesterday after deadline. “(Swartz Creek) will be tough,” Carman-Ainsworth coach Bob Root said last week. “We beat them by only one-point last week.”

Root was referencing the 69-68 overtime victory the Cavaliers had on Feb. 19 at home. In that game, Denzel Watts scored a game-high 23 points while Cameron Morse came through with 16. The Cavaliers are going to need both players to come through again if they want to beat the Dragons, who will be out for revenge.

On the other side of the bracket, Flint Kearsley also received a firstround bye and faced host Lapeer West, which downed Lapeer East, 42-30 in the other opener. The district title will be determined tomorrow at Lapeer West at 7 p.m.

The Cavaliers concluded the regular season last Thursday with a 78- 60 victory over Metro League opponent Brandon.

Carman-Ainsworth took a little while to get going in this one as it led just 11-6 after the first quarter and trailed at the half, 27-25. The Cavs were able to build a one-point lead entering the fourth quarter, 48-47, but outscored Brandon, 30-13, in the fourth to earn the victory.

Morse was on fire all night long for the Cavaliers and scored a careerhigh 40 points. Justice Green came though with 14, while Watts scored just four points in the victory.