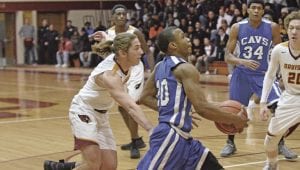 Ja’kavien Lewis led the Cavaliers in scoring against Clarkston with 12 points.

FLINT – A big third quarter deficit proved to be Carman-Ainsworth’s downfall in its 60-47 loss to Clarkston Tuesday.

The Wolves came into the game ranked second in the state in Class A.

The Cavaliers trailed just 30-29 heading into the third period. But Clarkston outscored Carman-Ainsworth 17-7 in the period to take a 47-36 lead into the fourth.

“We came out flat (in the third quarter),” Carman-Ainsworth coach Jay Witham said. “We had poor shot selection and turned the ball over which they converted into easy baskets.

“They did a good job of boxing out. They were more aggressive on the 50-50 balls.”

Ja’Kavien Lewis led the Cavaliers with 12. O’Mari Duncan had 11 and Michael Fletcher tossed in nine.

Foster Loyor had 26 for Clarkston. Dylan Alderson added 12 and Taylor Currie chipped in 11.

The loss was the first of the year for Carman-Ainsworth after six consecutive wins to start the season. But Witham was confident his team would learn from their game with the Wolves.

“We play Clarkston year after year because they teach you things about yourself,” he said. – K.W.