Cavaliers lose in opening round of districts 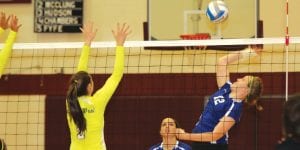 Carman-Ainsworth’s Jessica McClung goes up for a kill while teammate Jessica Smith backs her up in the opening round of the district volleyball tournament.

Junior Emily Rieves led West with 12 serving points, including serving the Panthers to a 9-0 lead in the second set. Junior Hannah Wagner had 17 kills with sophomore Shelby Woycik adding 12 kills.

Lapeer West moved on to play Metro League rival Swartz Creek Wednesday in the semifinals. The winner of that match faces the winner of the Lapeer East-Davison match in the finals today at 6 p.m.

“I am proud of the girls for working hard to battle back after losing the first set,” said West coach Mary Haslinger. “Carman-Ainsworth is a tough team and their girls played hard. We are now focusing on preparing for Swartz Creek.”