Cavaliers lose to Davison on the road 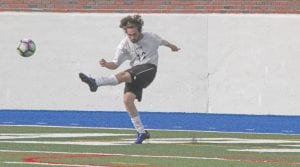 Carman-Ainsworth’s Zack Lloyd-Amthor boots the ball out of the defensive zone.

DAVISON – It was a tough league game for the Cavaliers on Monday as they fell to Davison on the road, 6-0. Todd Craton got the scoring going for Davison and Jacob Hill scored just six minutes later. Noah Gulledge buried one to make it a 3-0 game at halftime.

Zach Simpson would find the back of the net on a penalty kick in the second half and David Wykes followed with a goal of his own. Mohamed Dukuly recorded the final goal of the game and Jordan McNaughton was responsible for the shutout of the Cavs.

Carman-Ainsworth hosted the Cavalier Classic on Saturday, however, details of the tournament were not reported prior to VIEW deadlines.