Cavaliers lose to Lapeer in baseball 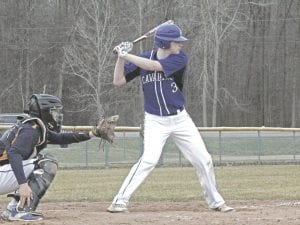 Carman-Ainsworth’s Garrett Gleason takes his turn at the plate.

LAPEER – Carman-Ainsworth traveled to Lapeer on Monday, dropping both games in the doubleheader.; Lapeer’s Ryan Frack threw a perfect first game, facing 21 batters with two strikeouts, no runs and no walks to beat Carman-Ainsworth 3-0. Lapeer scored runs in the first, third and seventh innings with five hits total.

In the second game, the Cavaliers fell 5-1. Both teams were held scoreless through four innings. Lapeer scored five runs in the top of the fifth inning. Carman-Ainsworth scored one in the bottom of the fifth, but failed to rally for any more. The Cavaliers tallied just four hits.

The Cavaliers fell to Grand Blanc last Wednesday, 3-2 in the first game of the doubleheader. The second game was called for darkness with Grand Blanc leading 6-0.

Carman-Ainsworth was leading the first game 2-1 up until the bottom of the eighth inning when Grand Blanc hit a single off a pitch from Matt Durbin and scored two runs for a walk-off win.; Aaron Gagnon started the night out pitching to Carman- Ainsworth, going four innings with zero runs, one hit and retired one batter. Durbin came in to finish the game, allowing two runs, three hits and struck out one.