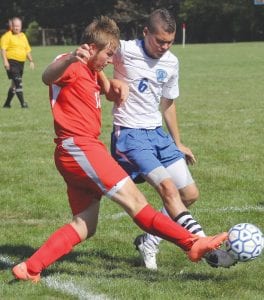 Sheridan Cox (6) battles for ball possession in a game earlier this season.

FLINT TWP. — Carman- Ainsworth poured in seven goals in the first half and ended the game two minutes into the second half with an 8-0 mercy-rule victory over Flint Northwestern on Monday.

On Sept. 19, the Cavs battled Mount Pleasant to a 1-1 standoff through the first half, but succumbed to three second-half goals by the Oilers in a 4-1 Valley loss at home. Morsi scored the goal for Carman-Ainsworth.

The Cavs played Powers Catholic in a Valley game yesterday after our deadline. Those teams will meet again next Monday in a non-league game to fill a date vacated by Flint Southwestern Academy, which did not field a team this year.