Cavaliers off to strong start in soccer 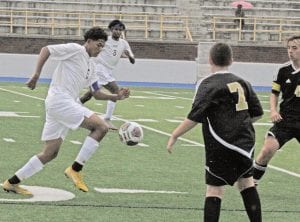 Carman-Ainsworth’s Wallace Hill rushes up the field against Corunna on Friday in the Powers Catholic-hosted annual soccer showcase at Atwood Stadium. Photo by Brandon Pope

Wallace Hill recorded a hat trick in the game. Zain Shukairy added a pair of goals and Tommy Taylor had one.

The Cavaliers opened the season with an 8-0 win over Corunna on Friday at the annual soccer showcase at Atwood Stadium.