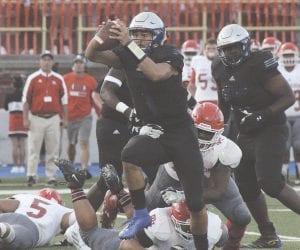 Carman-Ainsworth quarterback Dustin Fletcher slips out of the pocket and away from a Port Huron defender during last Friday’s loss at Atwood Stadium. Photo by Brandon Pope

The Cavaliers scored their first points of the season at the 9:01 mark of the third quarter when quarterback Dustin Fletcher threw a 36-yard touchdown pass to Chris Coleman. Darwin Bostwick’s extra point was no good, leaving Carman-Ainsworth in a 19-6 hole.

Finney scored an eight-yard rushing touchdown and a two-point conversion with 4:50 remaining in the fourth quarter. Ethan Balon added a 35-yard touchdown run at the 3:25 mark to give the game its final score.

Fletcher led the Cavs’ offense in all facets, going 11-for-17 through the air for 185 yards and a score. He also ran for 38 yards on 11 carries. Coleman was his primary target, reeling in four passes for 117 yards and a touchdown. Daylin Hamlin caught three passes for 41 yards, and Norman Montgomery has two receptions for 25 yards. On the ground, Jonaje Wright ran eight times for 33 yards.