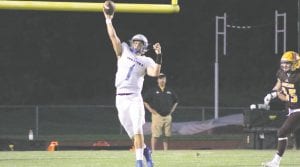 The Cardinals dominated from kickoff, as Caleb Smith returned the opening boot 87 yards for a touchdown. On Davison’s next offensive possession, quarterback Brendan Sullivan hit Latrell Fordham with a 68-yard touchdown pass. Less than a minute later, Sullivan kept the ball for an 18-yard rushing score, giving Davison a 21-0 lead at the 8:48 mark of the first quarter. The Cardinals added another score before the quarter break with a three-yard touchdown run by Smith.

Hayden Bailey scored the game’s only points in the second half on a threeyard run.

Individual stats for Carman-Ainsworth players were not made available.