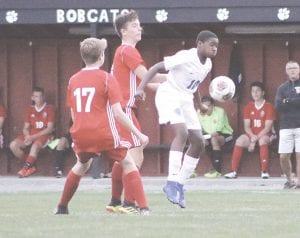 Carman-Ainsworth’s Mory Diao gets in front of the ball during last Wednesday’s game against Grand Blanc. Photo by Kylee Richardson

Last Thursday, the Cavaliers were defeated 3-1 against Swartz Creek.

Swartz Creek grabbed a 2-0 lead in the first half with a penalty goal from Kingsley Likukuta and a goal from Carter Pifer. Keenan Shukairy put the Cavaliers on the board in the second half on a helper from Darwin Bostwick. Swartz Creek then put the game away with a goal from Brady Taylor. Keeper Brijesh Kumar had six saves in net.

Carman-Ainsworth was pinned with a 9-1 loss at Grand Blanc last Wednesday.

The Bobcats led 5-0 at halftime. Bostwick had the lone goal for the Cavaliers, assisted by Jack Carter. Kumar had 23 saves in net.