Cavaliers open season with a loss 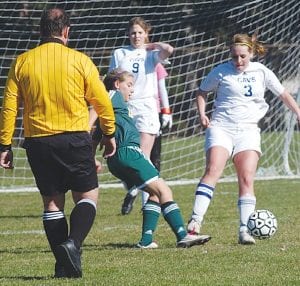 Carman’s Toni Jarnigin (#3) looks to clear the ball at home against Lapeer East on Tuesday.

FLINT — The Carman-Ainsworth girls’ soccer team opened the season against Lapeer East on Tuesday at home. The game did not go as planned for the Cavs, as they fell, 6-0.

The early season rust was evident as the Eagles scored three goals in the first half and led, 3-0, at the half. They added three more goals in the second half to run away with the game.

Lapeer East’s Ariana Donahue scored all three goals in the first half to record the hat trick. She scored all of her goals in a seven minute span. Madison Kobylik scored two goals for the Eagles and Brittany Morrell added one. Cassie Diaz and Kayla Dobrowiak each made two saves in net to record the shutout.

The March 25 game that was supposed to open the Cavs’ season was postponed due to the weather. Carman will return to the field tomorrow when it hosts Clio.