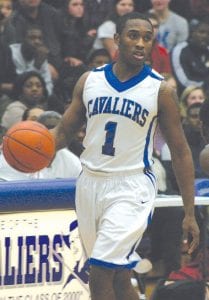 FLINT TOWNSHIP — Once again, Carman-Ainsworth and Grand Blanc opened the regular season against one another on Tuesday. The game between the Cavs and the Bobcats was a typical hard fought, close contest that Grand Blanc pulled out, 71-66, in overtime.

Carman-Ainsworth held a slim lead throughout most of the game, but could not hold on in the end. The Cavs led, 19-16, after one quarter and 32-29 at the half. Carman-Ainsworth extended its lead to 44-39 heading into the fourth quarter, but the Bobcats outscored the Cavs, 21-16, in the fourth to send it to overtime. Grand Blanc scored 11 points compared to just six for the Cavs in the extra session.

“(We were) down most of the game but never gave up,” Grand Blanc coach Chris Belcher said. “The kids are taking a lot of pride in their season this year. As we were down by three with 20 seconds left, the kids came to the side and just believed they could win. It was pretty cool to be part of that atmosphere.”

Carman-Ainsworth, 0-1 overall, hosts Flint Northern on Tuesday and travels to Flushing next Friday. The Cavaliers will have a chance to avenge this loss as the two teams play again on Jan. 2 at Grand Blanc.