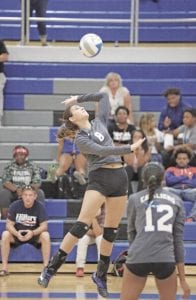 Carman-Ainsworth’s Emily Carroll, seen here going up for a kill, is one of the key players for her team in the districts.

Flushing, 28-19-1, faced Swartz Creek, 4-7-1, in the other semifinal match Wednesday. The Raiders moved into the semifinals by defeating Owosso in the only opening round match of the tournament Monday.

The winners of those two matches will meet for the district title in the championship match at 7 p.m. today. – K.W.