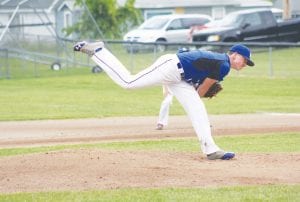 Carman-Ainsworth pitcher Austin Jerome follows through on a pitch against Swartz Creek in last Saturday’s Div. 1 district baseball tournament at Creek. The Cavs saw their season end in a 5-1 loss to the Dragons.

SWARTZ CREEK — After finishing second in the Saginaw Valley League this season to Lapeer (9-1 SVL-South), the Carman- Ainsworth (7-3 SVL-South) varsity baseball appeared primed to start the Div. 1 playoffs on Saturday.

The host Dragons, on the other hand, were just as ready for the postseason and proved it by taking leads of 2-0 and 3-0 at the end of the first and second innings on their way to beating the Cavs 5-1.

“The key to our loss was not being able to put hits together. SC did a great job of putting hits together to produce key runs,” said Carman- Ainsworth coach Steve Faculak. “We had four double plays against us. Hard to recover from eight outs that takes runners off the bases.”

With Carman-Ainsworth’s lone run coming in the third off the bat of Ryan Macko, Jawanza Edwards proved key at 3-for-3 with a run, Trent Green went 1-for-2 and Ray Macko had a hit in three trips to the plate. Taking the complete-game loss was Austin Jerome after allowing five runs, four earned, on seven hits and two walks with two strikeouts.

“We tried to get back in several times and had our opportunities,” Faculak said. “Swartz Creek did a nice job of keeping big plays out of the mix. Hats off to them. We beat them three times during the regular season. They obviously put together a good game plan and executed it well. (Dragons head coach Mike) Miller had them firing on all cylinders Saturday.”

Swartz Creek locked down the decision by scoring runs in the fifth and sixth. The Dragons went on to lose against Flushing 6-0 on Monday in the championship game. Flushing eliminated Kearsley 10-1 in the other semifinal.