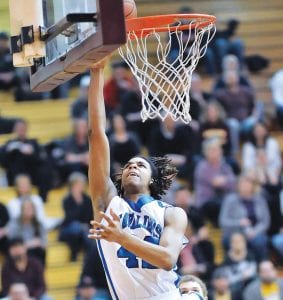 Carman-Ainsworth’s Juwan Willis goes up for a layup in last Friday’s district final at Davison.

DAVISON – Carman-Ainsworth played some of its best basketball of the season in the last few weeks, but the Cavaliers’ year came to a close last Friday with a 51-43 loss to host Davison in the Class A district final.

Carman-Ainsworth finished 9-13 but went 7-5 in its last 12 games, including a double-overtime loss to Davison on Feb. 20 after losing to the Cardinals by 14 in December.

In their third meeting, Davison took early control of the district final with a 32-19 lead at halftime. But Carman-Ainsworth stormed back with a 15-5 third quarter to pull within 37-34 going into the final eight minutes. Davison countered with a 14-9 fourth quarter to nail down the victory and the district championship.

Carman-Ainsworth reached the district final by edging Kearsley 50-48 in the March 11 semifinals. Bradley’s tip-in at the buzzer off a missed shot by Lewis capped a fourth-quarter rally by the Cavs. Kearsley had taken a 37-26 lead with a 21-8 third-quarter domination, but Carman-Ainsworth ratcheted up its defense in the fourth and outscored the Hornets 24-11.

Evans led the Cavs with 13 points, Lewis had 10 to go with four rebounds and four steals, and Bradley had eight points and four rebounds. Jarell Giles had seven points and three steals, Chan Pearson had six points and Juwan Willis had six rebounds, two steals and two assists.