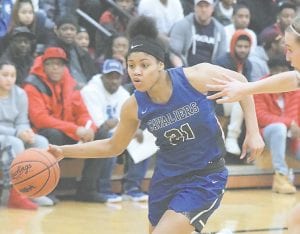 BEVERLY HILLS – The Carman-Ainsworth girls’ basketball team faced a determined Detroit Country Day at Country Day Tuesday, pulling out the 65-60 win. Heading into the game, the Cavaliers were 8-3 overall.

Carman-Ainsworth coach Lance Belil said his team was down by eight in the first quarter, but pulled away to the 22-point lead in the third. Country Day pulled to within one of the Cavaliers, but the final four points put the stamp on the game.

Carman-Ainsworth led 27-11 after the first quarter and 44-19 at the half. Carman-Ainsworth poured in 24 points in the third to Powers’ 10 and only in the fourth let off the gas allowing the Chargers to have the upper hand 10-4.

Strother led the Cavaliers with 34 points and Jessianna Aaron had 15.

Last Wednesday, the Cavaliers lost to Saginaw Heritage 46-41. At one point, the Cavaliers trailed by 15, but several times during the contest pulled to within two.

One point separated the two teams after the initial stanza with Heritage on top 13-12. Heritage poured in 17 points while limiting Carman-Ainsworth to just five in the second. The Cavaliers flipped the script in the third, though, outscoring the Hawks 14-4, but Heritage outscored Carman- Ainsworth 14-10 in the fourth.

McQueen led the Lady Cavs with 11 points and Strother had 10.