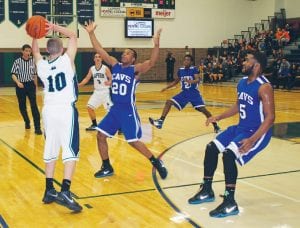 Ja’Kavien Lewis (#20) and Jaylen Bradley (#5) close in on defense for the Cavaliers at Lapeer.

SAGINAW — Carman-Ainsworth boys’ basketball did not disappoint fans last Friday seizing leads of 11-9 at the end of the first quarter and 31-30 at the half on their way to winning 63-56 at Saginaw.

While these games don’t count toward the conference standings and both teams scored 15 points in the fourth, the key to this victory was the 17-11 offensive advantage Carman-Ainsworth claimed in the third over the Trojans. Marshalling this offensive parade for the Cavs was Terry Armstrong and Omari Duncan with a team-high 16 points each, Michael Fletcher scored 10 and giving a seven point performance was Ja’Kavien Lewis.

In a road game that proved to be every bit as challenging as billed, Carman-Ainsworth went to Clarkston on Jan. 5 and wound up falling 64-47.

“(We) started a little flat and worked hard in the second half to gain momentum. (This was a) good learning game,” said coach Jay Witham.

The Cavaliers host Powers for a SVL-South game tomorrow.