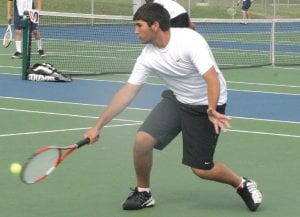 FLINT TOWNSHIP — The Cavaliers took on former conference rival Clio on Monday, beating the Mustangs, 7-1. The full score sheet was not available. However, a few of the key match results reported were at No. 1 Singles, where Darrius Jones got the win, 6-3, 6-1 and Noah Reed/Erick VanDyne were victorious at No. 1 Doubles, 6-3, 6-4.

Carman-Ainsworth was also in action at the Big Nine tournament on Thursday. The Cavs finished third overall out of four teams, totaling 16 points. Only two Cavaliers made it to championship matches, and both were defeated. Cameron Simmington lost at No. 2 Singles, 1-6, 0-6. Jeff Wilhelm was beaten at No. 4 Doubles, 6-0, 6-0.

The Cavaliers will be participating in the No. 8 regional at Saginaw Heritage today. Other teams competing at this regional include Davison, Grand Blanc, Grand Ledge, Holt, Midland, Traverse City West, and host Saginaw Heritage. A few of those teams made it to the state finals last season. Grand Blanc finished ninth at state with nine points, while Grand Ledge came in 13th with three points. Holt finished in 15th with two points. Carman is currently sitting at 1-3-2 in the Big Nine, and 3-6-2 overall.