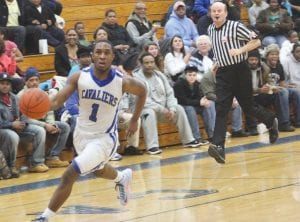 LAPEER — The Carman-Ainsworth boys’ basketball team will participate in the district No. 9-A at Lapeer West.

Kearsley, 12-7 overall, also receives a first-round bye and will face the winner of the Lapeer East, 3-16 overall, versus Lapeer West, 14-5 overall, game. The semifinal will be on Wednesday at 5 p.m. The district final will take place on March 8 at 7:30 p.m.

“Either team (Swartz Creek or Davison) will be tough. We beat Swartz Creek by only one-point last week,” said Carman-Ainsworth coach Bob Root on his first opponent. “Davison is playing very well at this time and always gives us a tough game.

“On the other side of the bracket, Lapeer West has had a great year and Kearsley may be the hottest team going into the district. So, it is very balanced and from experience, I know anything can happen during March Madness.”

Denzel Watts has been the catalyst for the Cavaliers all season long and in order for a long postseason run, he will have to continue to be just that. Other players capable of stepping up and helping Watts are Malik Seales, Cameron Morse, Justin Person, Justice Green and Jaylen Randle.

Other scores: The Cavs hosted Mt. Pleasant on Friday and earned a hard fought, 74-66 victory. The Oilers held a slim, 17-16 edge after the first quarter, but Carman-Ainsworth responded with a 26-14 advantage in the second quarter to lead at halftime, 42-31.

Mt. Pleasant tried to fight back and outscored the Cavs, 15-8 in the third quarter, but Carman-Ainsworth edged the Oilers in the fourth, 24-20.