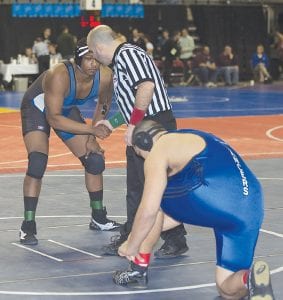 AUBURN HILLS — The Carman- Ainsworth wrestling team took two wrestlers to the Palace of Auburn Hills for the individual state finals and came away with two All-State wrestlers.

Heavyweight Mark Byrd earned All-State honors with a fifth-place finish. He started his tournament with a 3-2 victory over Jeff Tautolo from Harrison Township L’Anse Creuse and a 2-1 overtime victory over Ben Poirier from Canton.

Byrd went on to lose two straight matches to Justin Dozier of Brownstown-Woodhaven by fall at 3:11 and Adam Bennett of Romeo by default. Byrd defeated Ryan Hankins of Davison by default in the fifth place match to finish with a 52-10 record.

Jake Weissend took second place at 135 lbs. and concluded his season with a 58-3 record. Weissend began his tournament with an 8-1 decision over Keith Kooperman of Brighton followed by a 5-1 victory over Nick Vandermeer of Clarkston.

In the semifinals, Weissend won by injury default over Angelo Latora of Portage Central then defaulted the state title match to Alec Mooradian of Detroit Catholic Central.